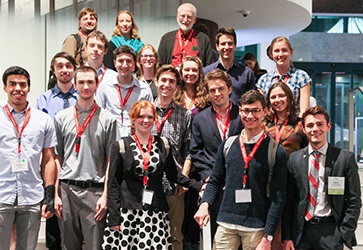 This is the Web Page of the Davidson College Chapter of SPS.  The above picture is of our SPS Chapter at PhysCon 2016 in San Francisco, CA. !6 students (one was an AZC) and 3 faculty attended.

January 30: First SPS Meeting of the spring semester with pizza.

January 19: PhysCon 2016 Seminar. Join us for a seminar presented by the 15 students who attended PhysCon 2016.

November2-6: PhysCon 2016. We have 16 students and 3 faculty attend the 2016 Quadrennial Physics Congress in San Francisco, CA. This was supported by a Clark Ross Davidson Research Initiative (DRI) Group Investigation Grant.

October 15: Society of Physics Students at a Davidson Football Game. We had several students and faculty on the field for academic appreciation day.

October 17: Public lecture and dinner with Dr. Naomi Halas as part of the Smith Lecture.  Also meeting with the Women in Physics group.

October 12: Society of Physics Students Meeting. We had a PhysCon themed meeting to prepare for the big trip.

September 2: Vermonster Challenge for MS. Our bellies were willing and this year we did it.  We had two teams and Team 1 won! Team 2 was content in just eating the ice ream at a reasonable pace.

September 6: First SPS Meeting of the semester.  Join us to discuss events this semester and learn about the Society of Physics Students and Sigma Pi Sigma.

August 24: Davidson College Activities Fair from 5:30-7:30 p.m., on Chambers Lawn. This is a super opportunity to connect with new students as well as upper-class students about SPS.