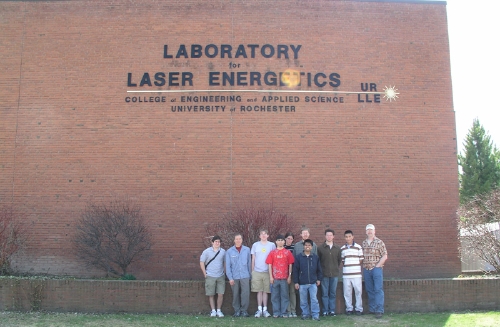 Article 1 – Name
Henceforth, we shall be known as the Ithaca College Chapter of the Society of Physics Students, or SPS.

Article 2 – Purpose
Our purpose shall be to work on physics related activities and community service regarding science, specifically physics.

Article 3 – Affiliations
We are affiliated with the Society of Physics Students (SPS), a national student physics organization, and the American Institute of Physics (AIP)

Article 4 – Membership
Membership is open to any student interested in physics or science. Membership dues are $20 per year, to be paid to the national office of SPS. The membership of this organization must consist of at least 51% undergraduate and graduate students, currently matriculated at Ithaca College.

Article 6 – Officers and Duties
President – Manager of all trips, activities, and community service projects, Presides over all SPS meetings, and is responsible for general organization of the club
Vice President – Manager for Robotics Projects. Lets the Robotics team know of any administrative issues. Works with the team and treasurer for equipment purchases, and maintains any and all paperwork associated with robotics
President and Vice President also act as faculty contacts and as spokespeople with people outside of Ithaca College, primarily with respect to their associated duties listed above
Secretary – Duties include maintaining physics bulletin boards and recording notes at meetings. Also responsible for updating and maintaining the SPS webpage with current information
Treasurer – Duties include accounting, and leading all fund-raising projects. Maintains all paperwork associated with funding.
All members of the executive board must be physics majors or minors.


Article 7 – Elections
Elections are held every April for the upcoming school year. Any current physics major or minor may be nominated for an executive board position. Positions will be determined by a vote by all SPS members. Any ties will first be settled by a tie-breaker vote. Any remaining ties will be resolved by the faculty advisors.
All elected officers must be a member of SPS before taking office. If an elected officer does not join SPS by September 1st of the year they are to assume office, their position is forfeit, and will be reassigned by the faculty advisor.
Beginning in the Spring of 2006, the treasurer and secretary positions will also become President-elect and Vice President-elect positions respectively. These officers automatically become President and Vice President after one year of service. Thus, all elections held Spring 2007 and onward will only elect these two positions.

Article 8 – Meetings
There will be a minimum of two meetings per semester. Any executive board member may call a meeting when warranted.

Article 9 – By Laws
All new amendments must be passed by a majority vote of the executive board, and can be initiated by any member of SPS. Any ties will be resolved by the faculty advisors.