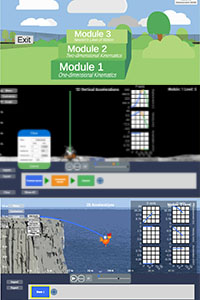 +
1D & 2D kinematics and Newton's laws of motion in STEPP

STEPP (Scaffolded Training Environment for Physics Programming) is an environment for students to learn physics concepts, modeling and computational thinking synergistically. In STEPP, students decompose mechanics problems and build simulations using a modeling tool based on the Finite State Machine (FSM). Three STEPP Modules, Module 1 on 1D kinematics, Module 2 on 2D kinematics and Module 3 on Newton's laws of motion, are available at stepp.utdallas.edu. The modules are a web app and ready to be played in a web browser on a laptop or desktop computer. The topics covered in the modules are taught in high school classes as well as in introductory college physics courses across the United States. STEPP is multi-representational. In each level of each module, students model a mechanics problem as an FSM and see the simulation result as an animation, graphs, free-body diagrams, numbers, equations, and other representations all of which are synchronously displayed. To avoid cognitive overload, the display of graphs, velocity, acceleration, grid, axes, background images, equations, and other representations can be turned on/off. Scaffolding is an instructional method with two key aspects: (a) providing structure and support for completing the task, and (b) gradually removing supports so that the student can independently solve the problem. Finite State Machines (FSMs) are a method for state-based modeling and have been used to design algorithms and teach programming and engineering for decades. FSMs are effective in teaching CT because FSMs facilitate students to learn all integral elements of CT that include abstractions, structured problem decompositions, iterative/recursive thinking, conditional logics, efficiency, and debugging. Scaffolding and dynamic modeling with FSMs allow students to focus on the aspects of CT that support physics learning, e.g., problem decomposition, abstraction, and algorithms, instead of the aspects that are mainly about programming. The use of FSMs, coupled with the scaffolded approach of STEPP, allows STEPP to provide students with simulations that are physically accurate yet initially described by natural-language states in accord with their intuition. As physical concepts like displacement, velocity, and acceleration are introduced at increasingly higher levels of each module, students learn how their intuitive states of motion can be more rigorously defined in the language of physics. STEPP has the versatility to allow students and instructors to create simulations based on problems in their own curricula. Tutorials are available at https://stepp.utdallas.edu/tutorials. Module 0 introduces concept maps and Module 0.5 introduces the Finite State Machine. The STEPP Project is funded by a STEM + Computing Grant from the National Science Foundation.

This material is freely available to registered verified educators.