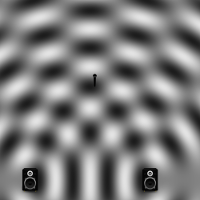 This exercise illustrates wave interference in 2D by adding two sine-waves together. The result looks very much like the interference pattern that can be created with ripples in a pond. This exercise will use a programming language called [p5.js](http://p5js.org) that is very similar to C and C++ programming. (Note: If you are familiar with C or C++ the main difference you will see is that there is no main() function and instead the draw() function serves this role.) **Importantly, this exercise can be completed using any computer or chromebook without downloading any software!** This exercise is designed for an algebra-based physics class at the college or high school level. It may also be useful for calculus-based physics for non-majors (e.g. engineering & science majors). However, it does use a taylor expansion, so perhaps it is more of an introductory calculus based exercise This exercise is part of a series of exercises developed by Prof. Chris Orban. There are pre-and-post assessment questions associated with this exercise (not available here) that are being used in an educational research study. If interested to collaborate on that study please e-mail Prof. Chris Orban (orban@physics.osu.edu). The first paper from this study [is available at this link](https://arxiv.org/abs/1701.01867), the second paper which discusses the electromagnetism exercises [is available at this link](https://arxiv.org/abs/1707.00185)

This programming lab is designed to illustrate the idea of wave interference. This happens because of the principle of "superposition". For sound waves, this 20 dollar word just means that if there are two speakers in a large room or open space, the amplitude of the sound waves at a particular point in that room are the sum of the waves of the two speakers. ![](images/WaveInterference/interference0103.png "")

Step 1. Open up the code in an editor

Make sure to set your speaker volume low before you press play!!! Click here to open up the code in an editor Press the play button (red triangle) in the top left to run the code. If for some reason you can't open it up in the editor you can also try out the interactive at this link Here is a version without the red line that runs faster (useful for chromebooks)

Step 2a. Move the little microphone to find the constructive and destructive interference

Step 2b. Move the speakers around

Move the speakers around by clicking and dragging the speakers to a new location on the x axis. How does it change the interference pattern?

Step 3. Look at this diagram:

Step 4. Think about the math involved

Step 5. Look at the diagram again and figure out r1 and r2

Step 8. Plot up the lines of destructive interference!

Modify the code to plot up the lines in the programming activity. Show that the lines for $n = 1$ match up well with the interference fringes. The result should look like this: ![](images/WaveInterference/interference0114.png "")

Step 9. Move the speakers around!

How to get full credit on this programming lab

The instructor materials are ©2017 Christopher Orban.