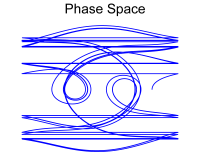 #### Exercise 1: Euler-Cromer Model of the Rigid Pendulum Build a computational model of a plane undamped, unforced rigid pendulum using the Euler-Cromer method. Assume your pendulum consists of a rigid metallic rod, one meter in length, with a mass of 1kg. Also assume that one end of the rod is fixed to an immovable support, and that the rod is free to rotate without bound in a plane. For initial conditions, assume the rod is displaced at some angle, greater than $90^\circ$, relative to its vertical minimum potential energy configuration, and released from rest. This physical situation has no exact analytical solution with which you will be able to compare the results of your computational model, so you must carefully determine a value of $\Delta t$ that produces an accurate approximation without the benefit of making a comparison. Describe in detail the procedure you used in arriving at an acceptably small value of $\Delta t$, show plots of the angular displacement and angular velocity as functions of time, and comment on the pendulum's dynamic behavior. Is the behavior of your computational model what you expect for a real pendulum? #### Exercise 2: Comparison with Analytical Small Angle Approximation Solution Once you have determined a value of $\Delta t$ that produces an acceptably accurate computational solution, compare the computational results (angular displacement as a function of time) with the analytically determined function for the angular displacement $$\theta\left(t\right)=\theta_0\cos\left(\sqrt{\frac{2g}{L}}t\right)$$ for the rigid pendulum, resulting from the small angle approximation. Comment in detail on your observations. #### Exercise 3: Phase Space A very useful plot for analyzing periodic systems is known as a phase space plot, and is simply a graph of velocity vs. position. The resulting curve is known as a phase space trajectory. In the case of the plane rigid pendulum, the phase space trajectory is found by graphing angular velocity vs. angular displacement. Produce a phase space plot for the plane pendulum using the parameters and initial conditions you used (including an accurate value for $\Delta t$ !) in Exercise 1. Comment in detail on the resulting phase space trajectory. #### Exercise 4: Damped Rigid Pendulum Now, add a damping term to your pendulum model. Explore, and produce graphs of (time dependent behavior as well as phase space), the behavior of the model by systematically varying the damping strength $b$ . Use the same values for the physical parameters and initial conditions as before. Describe the effect of increasing the damping strength, while keeping the other parameters the same. Can you damp the pendulum to such an extent that it doesnâ€™t actually oscillate? #### Exercise 5: Damped, Driven Rigid Pendulum Next add a driving torque to your pendulum model. Once you're sure that your model is accurately computing the damped, driven pendulum's dynamics, systemically explore the behavior of the model by varying the driving torque amplitude $\tau_d$ . Use the same physical parameters and initial conditions as before, including values of $b$ = 0.2 and $\omega$ = 3 rad/s for the damping strength and angular frequency of the driving torque, respectively. Then, vary the magnitude of the driving torque amplitude from 2 Nm to 10 Nm, in 1 Nm increments, producing time-dependent and phase space plots for each value of $\tau_d$. For the time-dependent graphs of angular displacement and angular velocity, only a few periods (perhaps 5-6) are necessary to plot, but for the phase space trajectories it will be most interesting if you take the computations out to a few hundred thousand time steps or more. Of particular interest will be the phase space trajectories. The rigid pendulum is a type of *nonlinear* system, and therefore the dynamics actually become chaotic for certain physical parameters and initial conditions. To best observe the chaotic behavior, restrict the values of the angular displacement to the range - $\pi$ to +$\pi$ , by including two if-then constructions at the very end of the loop in which you implement the Euler-Cromer algorithm. If the angular displacement $\theta$ becomes less than -$\pi$ then its value is increased by 2$\pi$ . If $\theta$ becomes greater than $\pi$ then its value is decreased 2$\pi$. Since $\theta$ is an angular variable, values that differ by 2$\pi$ correspond to the same physical position of the pendulum. This restriction is not necessary, but will be convenient for your analysis. Describe in detail the dynamical behavior of your model as you vary the driving torque. Can you identify the behavior that corresponds to chaotic?

In the Theory section you derive the moment of inertia as
I = M(L/2)^2 = M L^2 / 4
but this neglects the rotation of the rod around its center of mass. The actual moment of inertia, applying the parallel axis theorem, is
I = M L^2 / 3

I would like to have the students quantitatively compare measurements of a meter stick with results, so the wrong I would introduce a systematic error.

Re: Moment of Inertia

The moment of inertia does indeed have the incorrect factor of 1/4 (instead of 1/3) multiplying ML^2. The typo somehow made it past the reviewers. Due to the nonlinearity of the system, this erroneous value for I produces solutions vastly different from the solutions displayed, and in that sense the situation is far worse than merely introducing systematic error.

The editorial team is currently working on a procedure for correcting mistakes that have been identified in the Exercise Sets, and when implemented, we'll get this one corrected.

It is not possible to get answers as depicted in Fig 4. where the computational model and small angle approximation is closed together.

i run both python and Easy JavaScript Simulation and the answers is both same but different from the suggested solutions.

sorry
i made a mistake, the answers is indeed correct.
i found the XLS solution useful in my debugging.
thanks!

The instructor materials are ©2016 Kelly Roos.