Exercise Sets » What a Drag: A Projectile Motion Game with Air Resistance 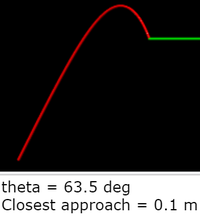 +
What a Drag: A Projectile Motion Game with Air Resistance

This exercise set is designed to give students experience in numerical modeling via classic drag problems in physics. Specifically, students will design a game in which an object is launched at high speed with the goal of meeting another moving object in the air. As these types of problems (especially in the context of high-speed air friction) do not readily yield analytical solutions, the exercises will begin with guess-and-check methodologies and later explore parameter spaces to arrive at optimal solutions.

####Exercise 1 A drone has entered forbidden air space moving horizontally at an altitude of $h = $ 1 km and a speed of $v_\mathrm{d}=$ 200 m/s. In response, when the drone is $d = $ 5 km away in the horizontal direction, an EMP (i.e., electromagnetic pulse) shell is launched at a speed $v_\mathrm{s}$ and angle $\theta$ in an attempt to disable the drone. Write a program which 1. allows a user to input $v_\mathrm{s}$ and $\theta$ (between 0° and 90°). 2. visually simulates the shell and drone motion with no air resistance. 3. ends the program when the shell and drone begin moving farther apart. 4. records and displays the closest approach, declaring victory if the shell gets within 10 m of the drone. The game will almost certainly be won only through several iterations of guess-and-check. ####Exercise 2 Having successfully coded and won the game, now add turbulent (i.e., quadratic) drag to the shell of the form $$\vec F_\mathrm{d}=-kv^2\hat v$$ where $\hat v$ is the unit vector of velocity and $k$ is a constant that incorporates the shell's geometry and the fluid's properties into a single number. A reasonable value for $k$ might be 0.005 kg/m or so. Note that **Exercise 1** did not require the shell to have a mass since its acceleration was due only to gravity (i.e., downward at $g=$ 9.8 m/s2). However, there is now a motion-opposite force which causes $$\vec a=-g\hat j-\frac{kv^2}{m}\hat v$$ so that mass becomes a factor. Set $m=$ 4 kg and play the game again, noticing the stark difference between the inputs used in **Exercises 1** and **2** to win (e.g., especially take note of the required speed differences using a common angle). Print the $y$-component of the shell's acceleration at each step. How and why is it different than $-$9.8 m/s2? ####Exercise 3 Continuing with the parameters of **Exercise 2**, create a program which calculates the optimal shell launch angle with $v_\mathrm{s}=$ 700 m/s (i.e., the angle which produces the closest approach). ####Exercise 4 Setting $\theta=$ 90° and $v_\mathrm{s}=$ 400 m/s, find the minimum speed of the drone that would allow it to pass through without being hit from beneath (i.e., barely make it past a vertically launched shell) for both $k=0$ and $k\neq0$. ####Exercise 5 With $0°\leq\theta\leq 90°$, find two angles that result in victory for the same launch speed with $k=0$. Repeat with $k\neq0$.

Steve Robinson, "What a Drag: A Projectile Motion Game with Air Resistance," Published in the PICUP Collection, February 2020, https://doi.org/10.1119/PICUP.Exercise.PMDrag.

The instructor materials are ©2020 Steve Robinson.