Exercise Sets » Pascal’s Law and the Origin of Buoyancy 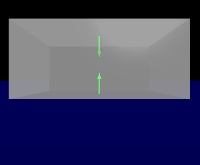 +
Pascal’s Law and the Origin of Buoyancy

These exercises are intended to supplement a lab or class discussion on fluid pressure / buoyancy in an introductory mechanics course. In the first two exercises, students develop a program that visualizes the variation of pressure with depth in water and in air. In Exercises 3 and 4, a simulation is developed that features a block submerged in water. The pressure on the block is used to calculate the buoyant force. The net force on the block (neglecting dissipative forces / viscosity) is calculated. The program allows students to simulate the motion of the block as it rises or sinks through the fluid and compare the buoyant force to the weight of the displaced fluid.

Quantify your answer by having the program calculate and print a percent difference between the magnitudes of the 2 forces: * percent difference = $\frac{|F_{bottom}-F_{top}| *100\%}{F_{top}}$ =______________ . Note: this is not a "percent error;" these two quantities are measuring two different things. A percent difference is a way of quantifying how far apart two numbers are. Since both of these numbers will appear large (when measured in Newtons), it makes sense to divide the difference by their overall value (chosen to be $F_{top}$ here). * In theory, should this percent difference be zero? If so, why? If not, why not?
# **Exercise 4** Open the template for Exercise 4, creating a new file rather than overwriting your previous one. This program will show the motion of a submerged block, assuming the fluid has no viscosity (ie, no friction). Locate in the code where the density of water is defined. Using this variable name, set the density of the block to equal 0.8 times the density of water. * Predict the direction of $F_{net}$ for a block of this density, when it is entirely submerged in water.
Fill in the blanks at the end of the while loop that update momentum and position for the block. Run the program. * What do the green arrows represent?
__Testing__ Does the block move in agreement with your prediction above? Consider the special case $\rho_{block} = \rho_{water}$. * Record your predictions for what the motion should be and then test your program. If it behaves in accordance with your prediction, continue. Reset the density of the block to $0.8*\rho_{water}$. __Analysis__ * What relationship do you observe between the weight of the displaced fluid and the buoyant force on an object?
* How does the behavior of the block change as its density decreases?
* Explain the physical reason for this change in motion as the block density decreases.

Deva O'Neil, "Pascal’s Law and the Origin of Buoyancy," Published in the PICUP Collection, July 2017.

The instructor materials are ©2017 Deva O'Neil.